August is an especially intense month for radical change and creation.

Driving along turning over the latest stories of fires and floods, the growing stream of revelations of attempts to undermine democracy in the U.S., the mountains of sorrow over the murdered children of Uvalde, the Supreme Court overturning Roe vs. Wade and crippling the EPA, I felt my heart was on fire with fury. What then is my role in this? Where can I help? I mulled over some wonderful groups and classes and gatherings that are popping up, green seeds in this scorched earth: Wisdomkeepers. Wayfinders. Dreamkeepers. Yes, all of those. Hillary Clinton (in a dream) pointed to me across the room at a party, smiling broadly, and said “You’re a revolutionary communicator!” In front of me, I see a car’s license plate: LVKEEPR. Yes, that too. 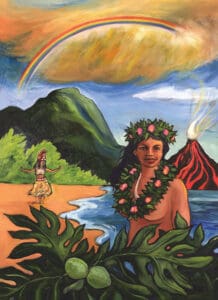 We are living in a time between worlds. A liminal space. A Great Turning. And this turning of the ages is also a Changing of the Gods. It is massive. It is chaotic. It is happening on every level of existence, even for the Earth herself who is expanding at her core. Is it any wonder we are disoriented? Exhausted? And yet, we have the potential to participate in the creation of a new world. We are hospicing the old dying patriarchal myths and midwifing the emergent myths of the sacred Feminine. She is the creative catalyst, the alchemist, the magician that shifts the entire foundation off civilization and what it means to be human. The astrological blueprint correspond with many ancient, indigenous prophecies that are birthing now. The end of the Piscean aeon and the beginning of the Aquarian Age. The end of Kali Yuga. The meeting of the Eagle and the Condor. The Return of Pachakuti, Reformer of the World, Reverser of the world (thanks to Tami Brunk)

On July 31-August 1 we had an extremely rare (2,400 years) conjunction of Uranus at the North Node of the moon in Taurus with Mars.

The Sabian symbol for this transit at Taurus 19:

A new continent rising out of the ocean.

The surge of new potentialities after a crisis. This is the most auspicious of times. Remember the truth of who you are. Imagine a new path forward. The evolution of the divine feminine leads the way. We cannot think our way out of these crises, because so much of what is happening is completely severed from the heart and from an acknowledgement of the sacred. We are witnessing the harm and destruction that comes from lost people, lost souls, cut off from Source. We need a revolution of embodied love.

“Every great dream begins with a dreamer. Always remember, you have within you the strength, the patience, and the passion to reach for the stars, to change the world.” –Harriet Tubman

The conflict between the old story and the new, the ongoing Saturn-Uranus square, is taking a major and magnificent turn towards a new destiny. The archetypal energies of the cosmos, which includes us, are moving and encouraging us to take action in the direction of our future in Taurus (the earth, our bodies, beauty, pleasure), with Uranus, the Great Awakener and Liberator joining, and a recent visit with Mars who is urging us to act boldly on our hearts’ desires. Venus in Cancer, the sign of the Mother, is bringing a reunion of love and power to the surface for the personal and planetary healing, growth and changes. For the good of all. How do we navigate this turbulence and find our way in the many mysteries unfolding a world never before seen. Listen. Stay awake. Do what you have to do to allow you to stay present to your dreams, to signs and synchronicities, to the magic, medicine, miracles available at all times. We need our intuition. We cannot think our way logically to a new path. Use the inner navigation system of your heart. It is our most trustworthy compass.

There’s a secret name inside you
That belongs to the stars
Wind, trees, waves, soul
Take what is yours and live it.
–Veronica Goodchild, Songlines for the Soul

In the original Iroquois confederacy, on which our U.S. Constitution was built, women and Grandmothers played an essential role. The Haudenosaunee followed the law of peace, the sacredness of the land, the balance and harmony between women and men. But when our Founding Fathers shaped our government, these values were not honored. The tumult we see now in the United States, the ongoing assaults on our democracy, was seeded in the shadows of our beginnings in genocide, land theft, violence and betrayal, slavery. A powerful and illuminating way to understand the turbulence of the present is to consider the astrology of the first Pluto return this year to the natal chart of the United States. Pluto, Lord of the Underworld, turns up secrets and corruption, the rot at the roots, in order to get to the truth. Pluto is squared by an outer planet discovered in 2005, named Eris, a spiritual warrior who speaks for the exiled and marginalized, and carries the energies of “chaotic creation”(astrologer Pam Gregory). The revelations in the last few years continue to shock and startle us. Perhaps if we, as a country, faced the reality of our grief and guilt we wouldn’t be a country that has more guns than people.

One of the first stories of female creator gods we will engage with in Mothermind Circles is the Hawaiian goddess Haumea, a name also given to the outer planet discovered in 2005. Haumea was a goddess of fire, a shapeshifter, the mother of Pele and the eight Hawaiian islands as described in the Kumilipo, creation story of Hawaii. She is a spirit of regeneration, creating land out of her fiery spirit and birthing children from different parts of her body. She summons a never ending supply of food for the people with her magic stick the Makalei. Haumea has returned to visible influence by the discovery in 2004 by a telescope on Mauna Kea. In astrology, she represents the re-emergence of belief in a Feminine Creator who is a mother and Grandmother, a magic manifestor, shapeshifter, and generous nurturer of her community. This regenerative creator Goddess can be found in your natal chart in Leo for 1925-1959 birthdates; Virgo for 1959-1992 birthdates; Libra for 1992-2025 birthdates.

We bring the medicine, magic and might of Feminine power to map a new future. We are at a massive crossroads. We need a new mythology, a new planetary cosmology. As storyteller Martin Shaw says: “The correct response to uncertainty is mythmaking.”

“Let us listen to dreamers who dare to imagine in the spaces made by the ruptures in society.” Paolo Freire